Toyota's compact van, the Proace City, might just be the small LCV you forgot to add to your wish list. Jonathan Crouch sees how it measures up.

Until the launch of this Proace City model, Toyota was competing in just 40% of the LCV market, so this compact van is hugely important for the brand. It's practical attributes are the same as those of the PSA Group LCV models whose design it shares, but the warranty's better, as might be the dealer service that comes with it.

Toyota doesn't have much of a history in making compact vans but the brand needs one if it's to grow its share of the LCV market. The Japanese maker already shares engineering with the French PSA Group to create its mid-sized Proace van, so it made sense to also borrow that Gallic conglomerate's design for a smaller model, which is what has brought us this Proace City. 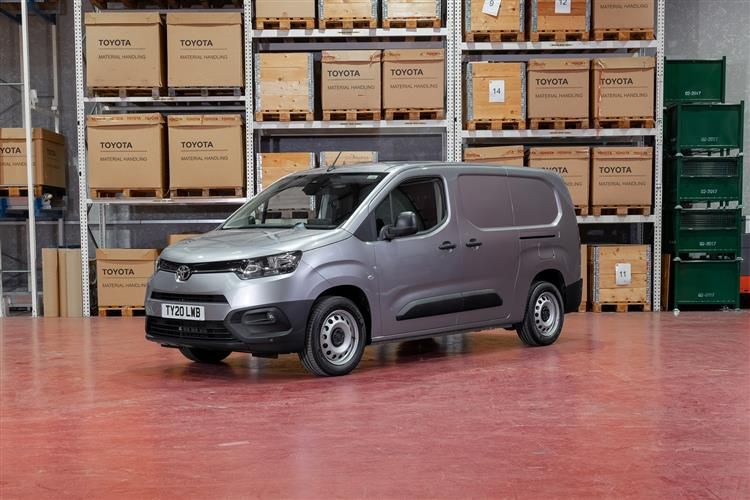 All the things that really matter about the Proace City are the same as you'll find in the small LCVs whose design is shares - the Peugeot Partner, the Citroen Berlingo and the Vauxhall Combo Cargo. But here, those established ingredients have been delivered with Toyota's strong equipment levels and comprehensive warranty, plus what some might see as more appealing packaging. In short, if your business needs a small but spacious van, this one has all the credentials to merit a place on your prospecting list.

The Euro6 engine range is made up of 1.5-litre diesel units borrowed from PSA and offered in 75 or 100hp forms. There's a 1.5-tonne towing capability that's un-bettered in the class. There's very little about the handling dynamics of this van that encourage you to push it on in any way at all. Instead, development priority has been given to the creation of a supple quality of ride - something daily drivers will probably appreciate rather more. The performance stats on offer will be quite sufficient for the daily needs of likely operators - with the 100hp variant anyway, which gets to 62mph in 11.5s en route to 107mph. The base 75hp model is slower, managing 15.8s en route to 94mph. 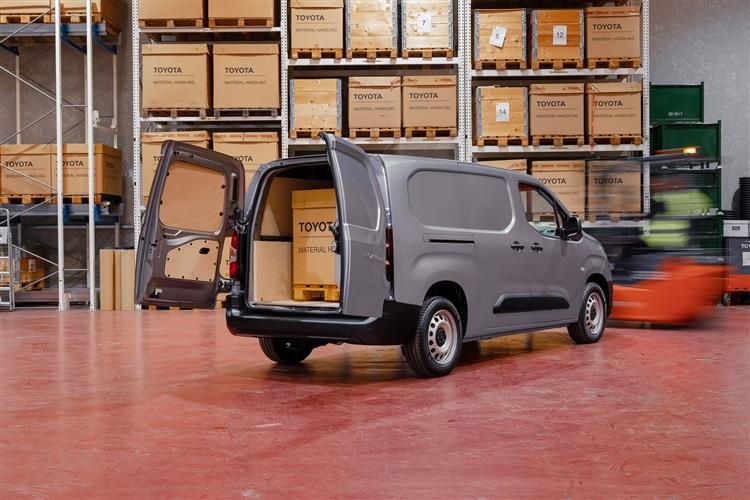 Decent highway refinement should be possible thanks to the installation of a full-height bulkhead in this cab. Further peace of mind can come with the addition of the extra-cost camera-driven safety kit that can be provided. This model's PSA-derived EMP2 platform enables short overhangs and a small turning circle for easy manoeuvring: the kerb to kerb turning radius is only 10.82m for the smaller 'Short' version and 11.43m for the 'long' variant.

What you get inside will be influenced quite a lot by your choice of trim. The plusher 'Icon' version gets a three-seater arrangement with a middle passenger seat backrest that fold down to create a desk top. 'Icon'-spec also gets you a 'Smart Cargo system' - basically a flap in the bulkhead that allows longer items to be pushed through from the load area, increasing load length by 1.3m for things like ladders. The base 'Active'-spec does without this feature (except as an option) and has two separate front seats. 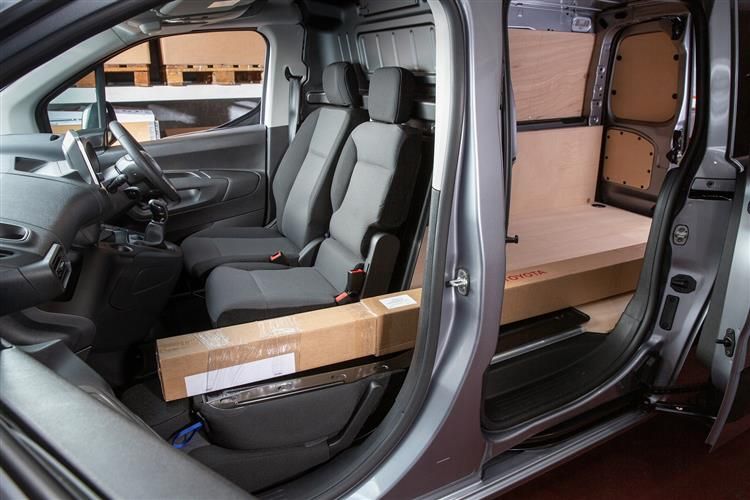 With both versions, there is no lack of storage space in the cab: 16 storage points, according to Toyota, these including a 15-litre area in the centre console. Toyota knows that for business people today, a van often has to serve as a mobile office as well as a means of transport, so there are plenty of connectivity features too.

At a stroke, this new compact van range extends the brand's reach to 80% of the national light commercial vehicle market, joining the established Proace medium duty van, Hilux pick-up and Land Cruiser Commercial in the brand's LCV range. This small van's arrival coincided with the launch of Toyota Professional, the brand's programme of services for its new and established LCV customers. From launch, Proace City prices were pitched in the £18,500-£22,000 bracket ex-VAT. There are two trim levels, 'Active' and plusher 'Icon'; opt for an 'Icon' variant and you'll be offered the option of finding around £600 more for the 'long' body shape. 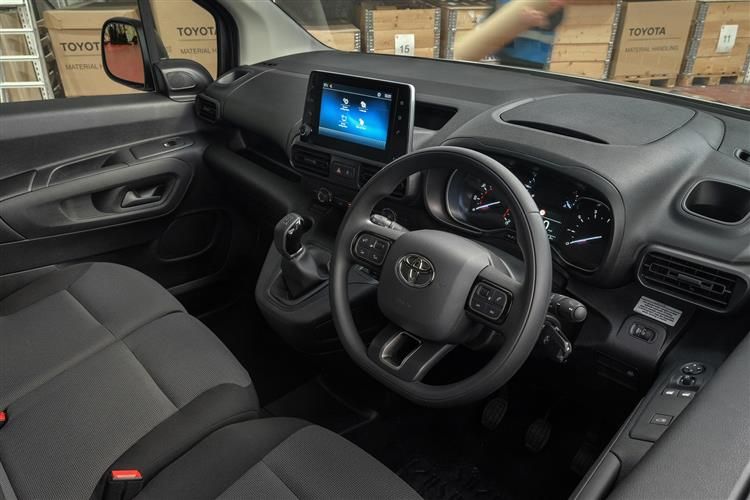 Icon grade gains a multimedia system with eight-inch touchscreen, smartphone integration with Apple CarPlay and Android Auto, three front seats, automatic wipers, electronic parking brake, reversing camera, front and rear parking sensors, cruise control with speed limiter, front fog lights and cornering lights. 'Icon' buyers also get the 'Smart Cargo system' allowing you to push longer items through into the cab via a flap in the bulkhead; this is an option for 'Active' buyers. An optional safety pack on the Icon includes pre-collision alert, road sign assist, lane-departure alert, and a coffee cup alert that advises the driver to take a break if they've spent too long at the wheel.

The dimensions are perfectly in line with the segment, with a length of 4,403mm for the 'short' version ensuring an optimum effective usable length of 1.81m and a 3.3m3 capacity, sufficient to accommodate two Euro pallets. There are slide-opening side doors and twin side-hinged rear doors that open to 180 degrees. Plus the payload is up to one tonne. The 'long' version, which is 4,753mm long, provides even greater load capacity - 3.9m3. Yet more space can be freed up with the clever Smart Cargo feature (standard on Icon, an option on Active grade). This uses a folding front passenger bench to add an extra 0.4m3, while also increasing the maximum load length by 1.3m. 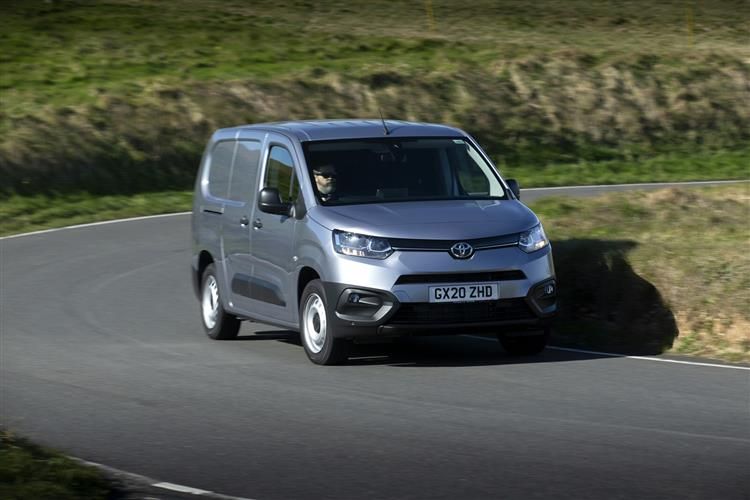 On the move, an engine stop-start function supports fuel economy and lower emissions. Maintenance schedules are up to 25,000 miles/two years. All Proace City vans are covered by a comprehensive five-year/100,000-mile manufacturer's warranty along with five year's roadside assistance. Residual values are expected to be strong, in line with those achieved by the Proace medium-duty van.

We're surprised that it took Toyota so long to get itself a foothold in the small van market, especially since the Japanese brand has had access to other platform-shared designs for decades. But the Proace City shows what its dealers have been missing out on. Namely a well engineered and very complete compact LCV contender that would merit a justified place on any business fleet manager's wish list. 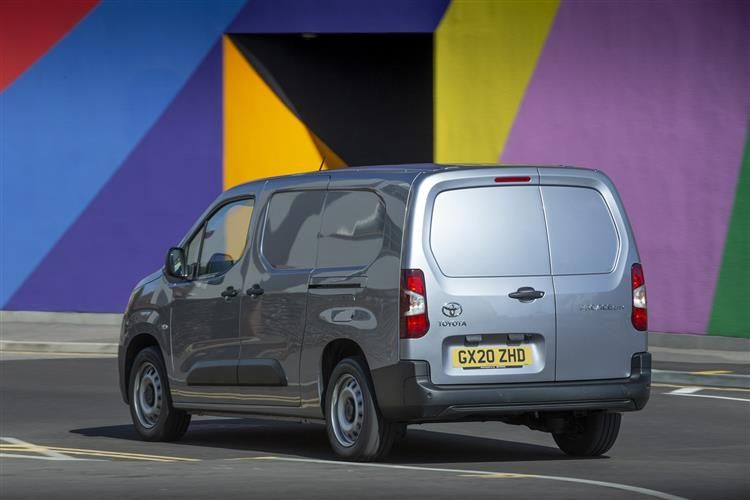 The fact that Toyota is a smaller player in the LCV sector is probably a plus here; you may well find you'll get more personal dealer service, rather than being just a number at an alternative volume brand LCV dealership. Which, given this van's very complete engineering and design CV, may be just enough for some to swing the decision Toyota's way. If that's the case for you, we'd understand your thinking.